90 Day Fiance star Larissa Dos Santos Lima’s best friend Carmen is not letting Colt Johnson spread rumors about her. The Brazilian lady fired back at the TLC star after he allegedly said that they used to be an item. Apparently, she’s been receiving private messages from strangers asking if she dated Colt. It seems Carmen has had enough as she recently took Instagram to answer all the issues about her.

In an Instagram post, 90 Day Fiance star Carmen called out Colt Johnson for supposedly spreading fake news about her. The close friend of Larissa Dos Santos Lima did not hold back as she vented out her anger over Colt’s claims.

Carmen accused Colt of fantasizing her and that he’s spreading malicious rumors about her. She believes that it was because of how she was able to help Larissa when they got separated. Carmen added that Colt created dummy accounts to start fake news about her, particularly rumors of her dating him while still married to Larissa. 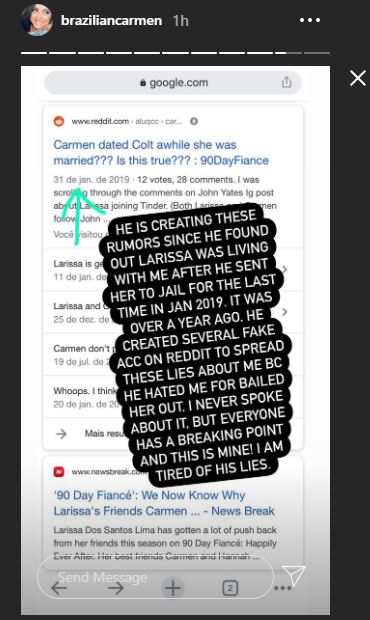 The 90 Day Fiance cast member pointed out that Colt is just mad at about her because of how she’s able to bailout Larissa after he sent her to jail last year. She also believes that Colt doesn’t like it when she gave shelter to her ex-wife.

Carmen Denies Past Romance with Colt

Carmen denied that she has a previous relationship with Colt Johnson. According to her, Colt has been creating fake conversations of her and his ex-girlfriend Larissa Dos Santos Lima and posting it online.

Carmen also dared Colt to post a picture of them together to prove his claims. She’s also confident that nobody will believe his accusations as he’s the one who has a bad image in the show. She added that Colt is just embarrassing himself on national television for his actions. 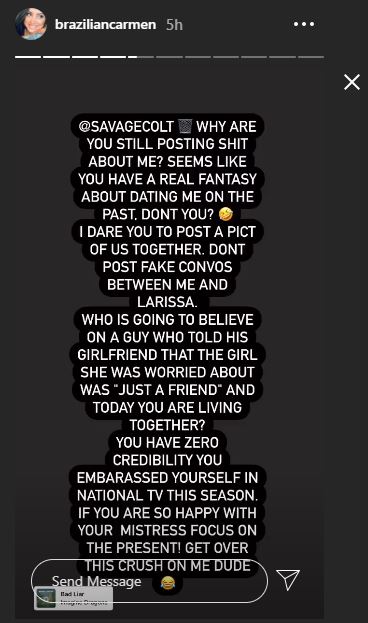 Meanwhile, 90 Day Fiance star Carmen thinks that Colt Johnson’s OnlyFans is just a big scam. Colt has been promoting his OnlyFans on Instagram for quite some time now. According to some reviews from his subscribers, he never sent any nude pics on his account despite his promises. All they got are just photos of Colt taking a bath and some wearing pajamas. 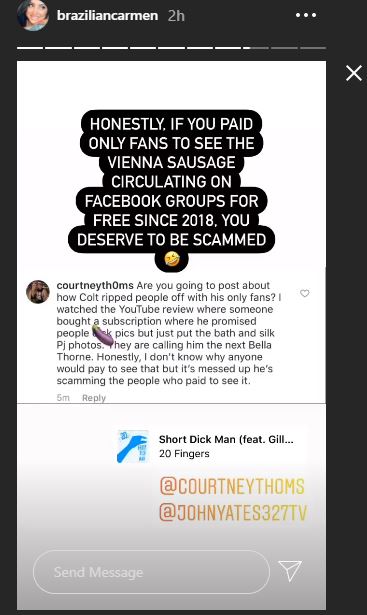 Colt has been making headlines recently following the launch of his OnlyFans. Despite it being subscription-based, some managed to leak some of his content online.