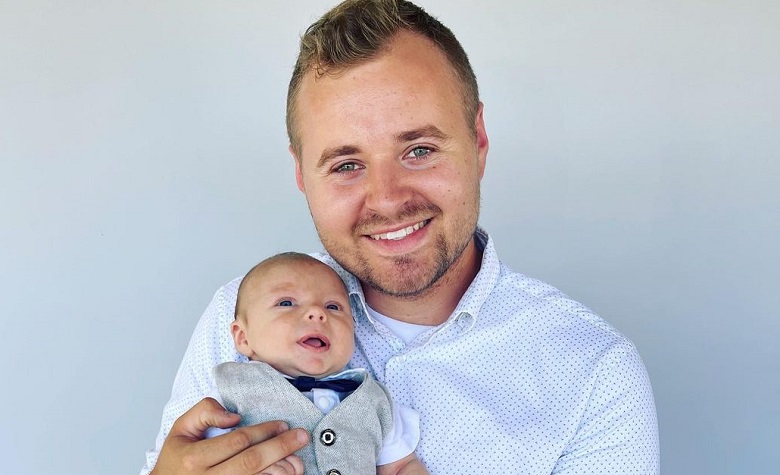 Counting On star Jed Duggar has been busy being a father to his first son, Truett Oliver Duggar. However, despite his tight schedule, he never forgets to keep in touch with the fans. It also appears that he’s becoming more active lately as the controversies surrounding the Duggars start to cool down. Now, Jed is back to share another update for the fans. This time, Jed shares an adorable 3-month-old picture of his son.

In a social media post, Counting On star Jed Duggar shared a 3-month-old picture of his son, Truett. “3 months,” Jed captioned. The adorable picture of Truett instantly caught the hearts of many. Some even took Jed’s comment section to talk about Truett’s heartwarming smile. “He is gorgeous! So perfect! Just like a doll!” one fan said. “Awww He is so Handsome,” another fan added. Meanwhile, some noticed that Truett appears to have inherited the hair color of his father.

However, fans quickly noticed that Katey is wearing pants, which is against the Duggar family’s dress codes. According to some, it might be an indication that the Duggars are no longer restricted from wearing pants. Michelle Duggar herself was even spotted wearing pants with Jinger Duggar during her trip to Los Angeles. At this point, Michelle and Jim Bob Duggar have yet to share their comments about the increasing number of Duggar women wearing pants and shorts. It also appears that they’re no longer interested in posting anything online since Josh Duggar’s CSAM arrest.

Counting On fans also think that Jed Duggar and Katey Nakatsu are focusing more on vlogging. Apparently, Jed previously took YouTube to share the Duggar family’s RV camping day. He also shared his recent travel to the Magnolia Silos with Katey, which he didn’t reveal on social media. According to some, it seems that Jed and Katey are making more money in vlogging. Some also think that the other Duggars are following the same trend. One of which is Jinger Duggar, who has already released 3 vlogs with Jeremy Vuolo.

It’s clear to see that things are changing when it comes to the Duggar family’s lifestyle. Meanwhile, fans are hoping that Jim Bob Duggar and Michelle Duggar will finally surface and address all the controversies surrounding them.