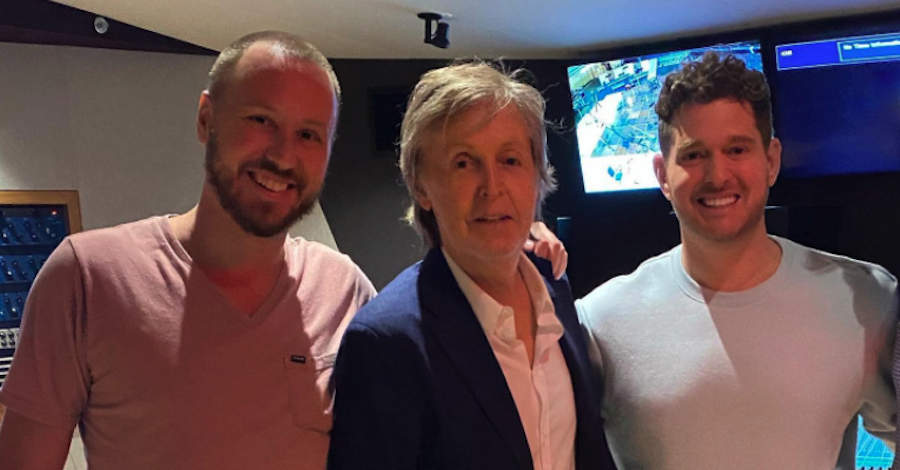 This trilogy tells the story of three long-time friends who find an antique veil. It turns out that this nineteenth-century veil has some magical love powers. Whoever should have the veil in their possession will find true love.

What do we know about Michael Bublé’s song, and when we can hear it in the Hallmark Loveuary movie?

Here are all the details!

Michael Bublé’s new album Higher is coming out on March 25. However, on February 10, he released the song “My Valentine.” Paul McCartney wrote this song. What makes this song even more special, is that Sir Paul also co-produced Bublé’s “My Valentine.” That is amazing! How did the collaboration happen?

Speaking to ET Canada, Bublé shared that they did not contact the legendary Beatle. Instead, McCartney contacted him. “His manager Scott called and said, ‘We knew you were doing a record, and Paul thinks you would do this song really great.'”

When “My Valentine” was released, Michael Bublé shared a photo on Instagram of him, along with Sir Paul and his producer, Nick Jacobson Larson. Bublé wrote, “It was an honor and a dream come true to work with Sir @paulmccartney on #MyValentine. Thank you so much for producing this song that was masterfully arranged by @nickjacobsonlarson.”

On Tuesday, the Hallmark Channel made a huge announcement about the third movie in the Wedding Veil Trilogy, Wedding Veil Legacy. “The all-new Loveuary premiere features Michael Bublé’s ultraromantic version of “My Valentine,” written and produced by Paul McCartney, from Bublé’s upcoming album Higher.

Hallmark does everything big, and there is nothing bigger than this intensely romantic collaboration between Bublé and McCartney.

When Can You Watch Wedding Veil Legacy?

Hallmark’s Wedding Veil Legacy promises to be another ultra-romantic movie, worthy of  Michel Bublé’s “My Valentine.” When can you watch it? It premieres on Saturday, February 18, at 8 p.m., Eastern, on the Hallmark Channel.

Be sure to check the Hallmark Channel website for schedule times for all three Wedding Veil movies. Moreover, be sure to listen to Michael Bublé’s “My Valentine” In Wedding Veil Legacy, and his new album Higher, which is released on March 25.