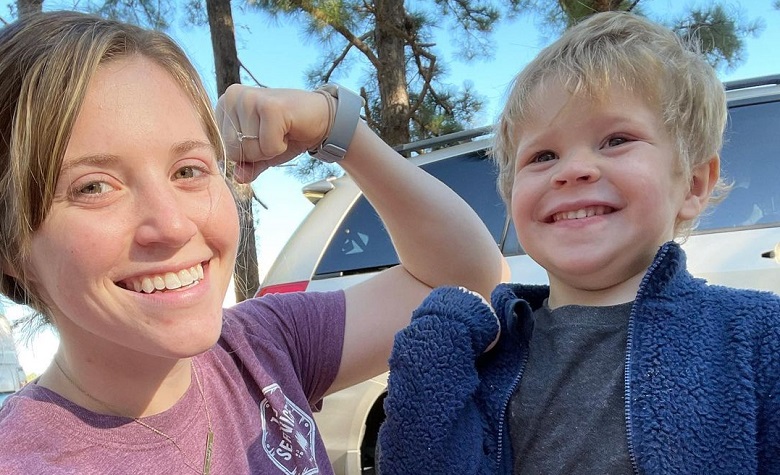 Counting On star Joy-Anna Duggar has been busy sharing her family’s recent activities online. Most of the time, Joy-Anna and her kids do physical activities. Apparently, fans have seen Joy-Anna and Austin Forsyth’s adventurous lifestyle. The two have been into sports lately as well, and it seems that their kids have inherited their hobbies. However, fans are calling out Joy-Anna for putting Gideon’s life in danger in her recent post.

Counting On: Joy-Anna Duggar Called Out For Letting Gideon Drive ATV Without Shoes

In a social media post, Counting On star Joy-Anna Duggar shared a picture of her son, Gideon, driving an ATV. “New toys, new adventures!” Joy-Anna captioned. However, eagle-eyed fans quickly noticed that Gideon wasn’t wearing shoes. Due to this, some took Joy-Anna’s comment section to call her out for putting her son’s life in danger. “Safety first. Shoes. For all you folks who like to name call etc. ATVs are dangerous. Look up accidents without footwear. On that note. Read. God bless you,” one fan said. “Where are his shoes? Plus, he really needs a real motorcycle helmet. Safety first,” another fan added.

This Wasn’t The First Time For Joy-Anna & Austin

This wasn’t the first time Counting On stars Joy-Anna Duggar and Austin Forsyth put their kids’ lives in danger. At one point, fans called out the two after putting a rifle near Gideon. Aside from that, Austin was also slammed after bringing Gideon into a zipline without any safety gear. On the other hand, Joy-Anna has been criticized for putting a beaded necklace and bracelet on her little daughter, Evelyn, which she can easily swallow. Joy-Anna herself also put her life in danger multiple times. At one point, Joy-Anna shocked everyone after being raised by an excavator to reach a branch of the tree as she sets up their swing set.

Counting On: Will Joy-Anna & Austin Change Their Ways?

It’s clear to see that Counting On stars Joy-Anna Duggar and Austin Forsyth truly loves their adventurous lifestyle. However, fans have been asking them to stop bringing their kids to their dangerous acts and keep them safe as much as possible. At this point, Joy-Anna and Austin have yet to share their thoughts about the fans accusing them of putting their kids’ lives in danger. However, Evelyn and Gideon have yet to experience such accidents, meaning that Joy-Anna and Austin have been taking good care of them despite their dangerous lifestyle.

Joy-Anna and Austin have been busy working on a new RV lately. The two also went headlines after sharing wholesome pictures of the kids in a pumpkin patch. Will this be the start of Joy-Anna and Austin’s modest activities?