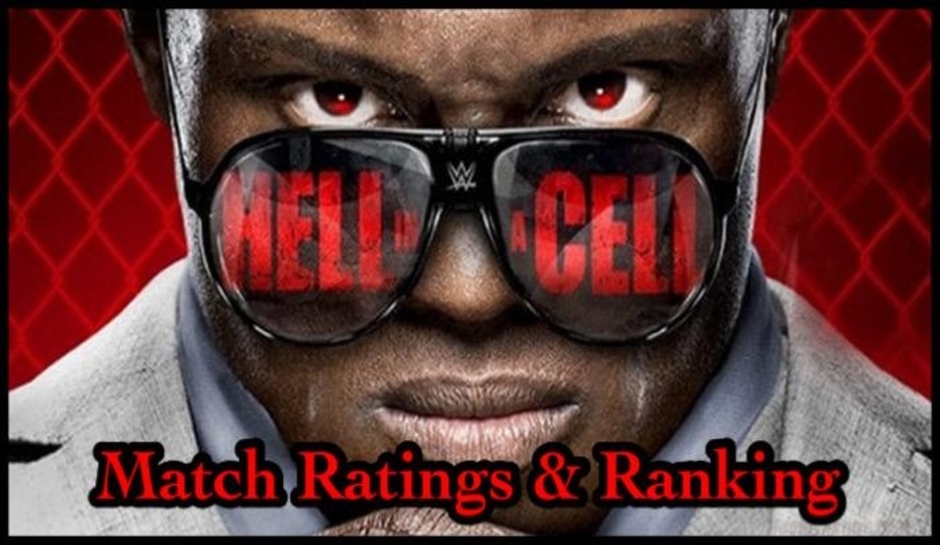 WWE Hell in a Cell 2021 was the final PPV event in the Thunderdome before the massive event at Summerslam in Las Vegas. Drew McIntyre got another shot at the WWE Title challenging Bobby Lashley in a Hell in a Cell match. Kevin Owens went one on one with Sami Zayn. Bianca Belair defended the WWE Smackdown Women’s Title in a Hell in a Cell against Bayley.

Every match on WWE Hell in a Cell 2021 will include a highlight moment from the match and how it ended, what the storyline progression is, and a final analysis. Each match will be given a star rating and be ranked from worst to best.

6) Alexa Bliss d. Shayna Baszler
Highlight Moment: Alexa Bliss absorbs Shayna Baszler’s attack before coming back with stiff kicks. Baszler regains control until Bliss makes another comeback, using apparent mind tricks before hitting a stiff DDT for a two-count. Bliss locks eyes with Nia Jax on the outside causing her to smack Reginald. Bliss then hits a twisting DDT before getting the win with Twisted Bliss.

.@AlexaBliss_WWE seems to be feeding off of the punishment @QoSBaszler is dishing out! 👀#HIAC

Final Analysis: This entire angle has to be viewed in its own world outside of the current canon of WWE. If you can suspend disbelief enough, there’s some enjoyment here. The match was just there but this isn’t about work rate. Skim it. **

5) WWE Raw Women’s Title: Charlotte Flair d. Rhea Ripley (DQ)
Highlight Moment: Charlotte Flair gets a quick roll-up for a two-count followed by a big boot to the face to start the match. Rupley sidesteps a charging Charlotte before hitting a bit of her own. Charlotte regains the advantage, working over Ripley with multiple submissions before closelining Riley to the outside. Ripley fights back but Charlotte maintains the advantage and heads to the top rope. Charlotte goes for a moonsault and lands on her feet as Ripley moves before connecting with a standing moonsault for a two-count.

Ripley absorbs a ground attack from Charlotte before kicking her off a figure-four attempt. Ripley catches Charlotte on top again and hits a superplex for a near fall. The action heads to the outside where Ripley hits Charlotte with the announce table cover and is DQ’d.

Final Analysis: Decent match but Rhea Ripley has been running on autopilot since Wrestlemania and her title run as been a disappointment. Lame ending on a PPV to boot gives this a Skim It. **3/4

4) Cesaro d. Seth Rollins
Highlight Moment: Cesaro jumps Seth Rollins on the entrance ramp to start before the actions heads to the ring. Rollins gets lifted with a backdrop as he retreats briefly to the outside. Cesaro forced the action back inside with a leap from the top rope that gets a near fall. Rollins is able to gain the advantage after side-stepping Cesaro into the second turnbuckle.

Cesaro makes a comeback after a stretch of offense from Rollins but is cut off after a falcon arrow. Cesaro hits a closeline before the big swing. A sharpshooter is applied by Cesaro but transitioning into a crossface. Rollins is able to reverse into a small package for the quick win.

Final Analysis: Solid match as Cesaro and Rollins both have chemistry together. The ending was a bit anti-climatic but it’s clear that this isn’t the end. Worth a Watch. ***1/4

3) Sami Zayn d. Kevin Owens
Highlight Moment: Kevin Owens attacks Sami Zayn as the bell rings, beating him from pillar to post as the action heads outside. Owens kicks Zayn between the legs before tossing him back into the ring. Zayn retreats to the corner but eats a cannonball from Owens who gets a two-count. Zayn finally gets the upper hand, working over the arm of Owens before the blue thunder bomb gets a close call. Owens attempts a stunner but Zayn hits a tiger suplex for another near fall. A running knee from Zayn sends Owens throat-first into the ropes and then a Helluva Kick is enough for the win.

One thing is for sure… @FightOwensFight and @SamiZayn will FIGHT FOREVER! #HIAC

Final Analysis: Another solid match between these two as they are more than comfortable with one another. Getting Zayn a win was the right call since he had to come out on top at some point. Worth a Watch. ***1/2

2) WWE Smackdown Women’s Title: Bianca Belair d. Baley
Highlight Moment: Baley quickly jumped the gun, bringing chairs into the ring to get the early advantage. Belair was able to use her hair as a weapon to avoid a chair shot before dropping kicking the chair into Baley’s face. Baley counter’s a superplex attempt and gets a two-count after tossing Belair into the ring post. On the outside, Baley brings steel steps from under the ring into the ring before tying Belair’s hair to the bottom rope. After untying her hair, Belair launches the steps to the outside and narrowly misses Baley.

Belair heads to the outside to ram Baley’s head into the cage. Baley is able to sneak under the ring and grab a kendo stick to use to her advantage. Baley charges at Belair and dives into a sunset flip powerbomb into the cage. Setting up two kendo sticks between the apron and the cage, Baley’s efforts are reversed into a spinebuster by Belair. Back in the ring, Baley ties Belair’s hair to the bottom of a steel chair before using it against her. After untying her hair from the chair, Belair then ties her hair to Baley’s wrist before using it as a slingshot. A ladder is brought into the ring as they both fight for the advantage with Belair hitting the Kiss of Death onto an open ladder for the win,,

Final Analysis: Bianca Belair’s title run has been less than stellar since Wrestlemania, but this was a step in the right direction. Great match to kick things off even if the outcome was a forgone conclusion. Must-Watch. ****

1) WWE Title: Bobby Lashley d. Drew McIntyre
Highlight Moment: If Drew McIntyre loses, he can no longer challenge for the WWE Title while Bobby Lashley is the champion. The action starts on the floor as Lashley slams McIntyre headfirst into the cage. McIntyre reverses a suplex attempt by Lashley and suplexes him into the cage. McIntyre grabs the steel steps and rams them into Lashley’s head before moving the action to the inside. Belly to Belly suplex by McIntyre to Lashley as they move back to the outside of the ring where Drew sets up a table. Lashley is able to gain control on the outside but is quickly reversed into getting slammed onto the steps.

Back in the ring, Drew McIntyre hits a reverse Alabama Slam onto a chair for a two-count. Drew comes off the top rope with a steel chair but is caught by Lashley. Drew counters into a sit-out powerbomb that gets another near fall. Lashley obtains a kendo stick with the help of MVP but is eventually countered by McIntyre back in the ring.

McIntyre grabs a chair but knocks out the referee before hitting the future shock DDT onto Lashley. Drew McIntyre hits Lashley with the chair and another belly-to-belly but only gets a two-count due to interference from MVP. McIntyre gets his hands on MVP and beats him senseless before Lashley applies the Hurt Lock on the outside of the ring. Drew backs up and crashes Lashley through a table on the outside of the ring. Back inside, McIntyre wears out Lashley with a steel chair before missing a claymore and getting choke slammed through a table on the outside. McIntyre heads back inside but is distracted by MVP allowing Lashley to get the roll-up and the win.

Simply doing whatever it takes. #HIAC

Final Analysis: Hard-hitting and vicious match that had my attention until the cheap finish. It makes Drew look incompetent and makes Lashley look like a weasel, which is not what you want in his character. Must-Watch for the match, but you’ll cringe at the final three seconds. ****1/4