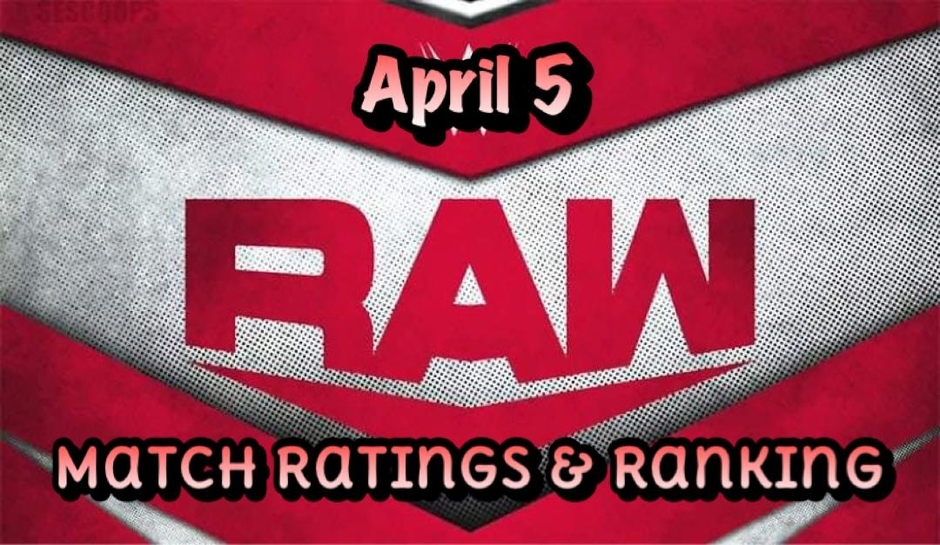 6) Braun Strowman d. Elias & Jaxson Ryker
Highlights: The cage was lifted for this match. Braun Strowman goes after both men but quickly is taken off his feet with a double backdrop. Elias and Jaxson Ryker hit top rope elbows and headbutts but can only get a two-count. Strowman quickly bounced back and power slams both men for the win.

Storyline Progression: Braun Strowman came to the ring surrounded by a cage as he promised to make Shane McMahon pay at Wrestlemania. Strowman vowed to take out Shane, not just for himself, but for everyone who has ever been called “stupid.” Shane comes to the ring and announces that Strowman will face Elias and Jaxson Ryker in a handicap match.

Final Analysis: A step above a squash and what we got wasn’t too good. This feud has just not worked in any way over the last few weeks on WWE Raw. Take a Pass. DUD.

5) Xavier Woods d. AJ Styles
Highlights: AJ Style jumped on Xavier Woods quickly, hitting a hit toss out of the corner. Woods charges but Styles locks in the calf crusher. Kofi Kingston throws a microphone at Omos causing a distraction in the ring allowing Woods to roll up AJ for the win.

Storyline Progression: On last week’s WWE Raw, the New Day mocked AJ Styles and Omos. That night, a match between Styles and Woods ended after an attack by Omus. Leading into the tag team title match at Wrestlemania, a rematch between the two took place.

Final Analysis: Too short the rate.  AJ Styles and Omos continue to look ridiculous, almost guaranteeing that they win the titles at Wrestling. Take a Pass. [NR]

4) Shayna Baszler & Nia Jax d. Asuka & Rhea Ripley
Highlights: Asuka starts off by getting the better of Shayna Baszler before Rhea Ripley gets the tag. After Ripley tosses Baszler to the corner, Nia Jax gets the tag. Jax and Ripley have a brief exchange before Asuka tags in. Asuka is able to break free of Jax’s power as Baszler and Ripley tag back in before the commercial. Back from the break on WWE Raw and Jax and Baszler are on the offensive over Ripley. Asuka makes a hot tag, taking out the tag team champions. The match implodes after Ripley beats down Asuka on the outside of the ring before throwing her back in the ring for Baszler to get the pin.

Storyline Progression: Rhea Ripley and Asuka signed their Wrestlemania contract last week, but were approached by the Women’s Tag Team Champions. A challenge was made by Niz Jax and Shayna Baszler, which was quickly accepted.

Final Analysis: The Asuka vs Rhea Ripley could end up a good match but it feels incredibly forced. Nia and Shayna are just kinda there and no one seems to care, much like the match. Take a Pass. *1/2

3) Bobby Lashley d. Cedric Alexander
Highlights: Prior to the match, Shelton Benjamin and Cedric Alexander jumped Bobby Lashey until the WWE Champion got the better of both men. The bell rings with Alexander attempting a go-behind until he’s met with a stiff body slam and a corner attack by Lashley. Alexander is tossed outside the ring as Lashley works him over, including getting fireman carry slammed into the ring post before the commercial on WWE Raw.

Back from the break and Benjamin serves as a distraction allowing Alexander to hit multiple suicide dives. Back in the ring, Alexander continues his offense with a flurry of kicks and a top rope dropkick. Lashley bounces back with a face plant and an elevated powerbomb. The Hurt Lock is applied that finishes it off before Benjamin attempts to make the save but also ends up in the Hurt Lock.

Storyline Progression: The Hurt Business shocked the WWE Universe (disappointing everyone in the process) when Lahsly ended the group last week and defeated Shelton Benjamin. Prior to this week’s match, Benjamin and Alexander threatened MVP that they will not let him and Lashley walk over them.

Final Analysis: This was a pretty fun match on WWE Raw, even if it felt a bit clunky at times. Lashley is a beast and is headed into Wrestlemania with a lot of momentum. Skim It. **3/4

2) Drew McIntyre d. King Corbin
Highlights: MVP joins the commentary booth. Slow start as King Corbin finally gets the advantage by choking Drew McIntyre in the corner leading to basic punches and kicks. McIntyre is whipped into the corner as Corbin hits a back suplex for a two-count. The action heads outside as McIntyre whips Corbin into the steel steps before the commercial.

Back from the break and McIntyre gets a two-count off a northern lights suplex. Corbin makes his comeback, getting a near fall of his own after a chokeslam. Corbin heads to the top and hits a superplex for another two-count. After hitting the End of Days, MVP hands Corbin his cane. McIntyre ducks and finishes Corbin off with a Claymore.

Storyline Progression: After Drew McIntyre came face to face with Bobby Lashley last week on WWE Raw, King Corbin appeared from Smackdown. Corbin answered Lashley’s bounty and as a result, went one on one with McIntyre.

Final Analysis: On the Corbin Curve, this was actually a pretty good match. Baron Corbin is typically as entertaining in and out of the ring as a stale saltine. but he had his working boots on tonight. As expected, Drew McIntyre was in his groove heading into Wrestlemania. Worth a Watch. ***

1) Riddle d. Mustafa Ali
Highlights: Sheamus joins the commentary booth. Chain wrestling to start as Mustafa Ali gets the early advantage before backing Riddle into the corner. Riddle connects on a gut wrench suplex but Ali bounces back with a dropkick for a two-count. The action spills to the outside as Riddle mocks Sheamus before falling back to a Russian leg sweep from Ali before the commercial. Back from the break and Riddle attacks Ali with palm strikes before getting his toes stomped. Ali locks in a sleeper hold but Riddle falls back before launching an attack in the corner. Exploder by Riddle followed by a senton. Ali makes a comeback and attempts a tornado DDT but gets caught in the BroDerek to finish it off.

Storyline Progression: Riddle will defend his US Title against Sheamus at Wrestlemania, but Mustafa Ali has other plans. The former leader of Retribution is flying solo these days and had an axe to grind against the current US Champion.

Final Analysis: Fun WWE Raw match that shows Ali deserves a bigger push than what he’s been getting. Hopefully he’ll be part of the post-Mania plans. Riddle has a weird character but he can go in the ring and his match with Sheamus should be solid. Worth a Watch. ***1/4