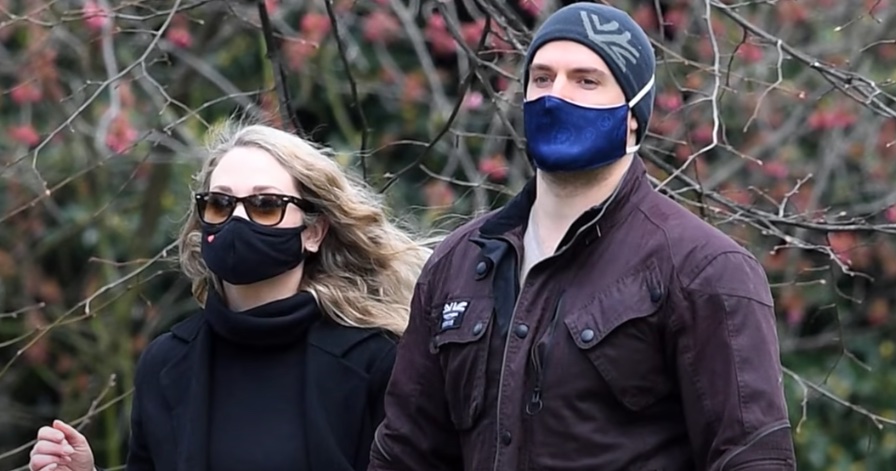 It has been nearly a week since Henry Cavill shared a firmly-worded post insisting he was “happy in love, and in life.” Although he did not mention her by name, he shared a selfie with his new girlfriend from Legendary Entertainment, Natalie Viscuso.

This likely stemmed from some online bullying a very small group of people participated in. It was regarding a Mother’s Day post that Viscuso made for her late mother who died of cancer. No matter what interpretation of the sentiment should be, no one wins when there is online bullying and alleged suggestions made to the American to harm herself.

Understandably, most of Henry’s 16 million fans were feeling, well, stung. Now they want to know what all of this fan drama is all about.

However, from the first, some fans have reportedly been skeptical about the relationship. That includes claims that this is actually a PR move by Cavill’s management. Others say that this is all in hopes to get a Superman deal going.

What’s the tea here? Why does Henry Cavill have so much fan drama?

One of the main frustrations that the “fandom” shared was a concern that London-based Henry Cavill and his Los Angeles-based lady love broke Covid rules. It is all wonderful that they found love across the pond, but this was a worldwide pandemic. People were dying. Others were isolated and dealing with mental health issues.

Moreover, a lot of NHS (the British medical service for us Americans) workers on the frontlines are fans of The Tudors star. Henry even shared a lovely post thanking the healthcare workers for this.

Moreover, The Witcher had several Covid-related delays during their over 80-week filming. This was concerning. Cavill’s post did not address these questions, nor was there an apology for breaking the rules.

Then, there are the posts that Natalie Viscuso is Henry Cavill’s fake girlfriend. Immediately, fans were suspicious. Not long after the chess photo, Viscuso got the coveted blue checkmark next to her Instagram name.

Why is this important? Anyone who wants to be an Instagram Influencer covets that blue dot checkmark. It seemed rather odd that a brand new girlfriend, who has never previously been an influencer, or published or created anything would suddenly have that blue dot. This raised red flags.

Next, there were comparisons between the physical body type, her height, and the hair of the woman in the initial pap walk, and a later photo of Natalie walking Kal, Henry’s adorable Akita. The photographer shared photos of Natalie talking to them, indicating that the photos of her and Kal on a walk could have been staged.

On his May 5th birthday, she shared a photo of the two of them. In addition, fans posted some photo discrepancies that appeared to be Photoshopped. Many fans are quite adept at knowing what is real and what was Photoshopped in, as the Kardashians know so well. They are called out on discrepancies all of the time.

Why would Henry Cavill, a good-looking man, with a solid career need a PR date? This is part of the Hollywood business. When it is time to promote something, or when you want to give Hollywood a nudge that you are available for work and roles, you have to do the pap walk.

However, should this be a PR stunt, Cavill fans will never know. He would have signed a contract that would prevent him from ever disclosing that information. But, there is some precedent for the calls that this all a PR move. Henry Cavill was in a very high-profile relationship. That was eight years ago.

Back in 2013, when Henry Cavill starred in Superman, he briefly dated Kaley Cuoco. Was this relationship real or fake? They were certainly the dream team. Cavill was in the spotlight due to Zack Snyder’s Superman. It was a well-known fact that Cavill, a self-confessed geek, was playing World of Warcraft when Snyder called him to give him the part.

Of course, Kaley Cuoco was the ideal nerd love interest, as she played one on the Big Bang Theory.

Add their mutual love of animals, working out and, all-over-gorgeousness, and they were the perfect pair. Perhaps they were too perfect? Could a publicist have arranged this relationship?

Did you forget that Kaley Cuoco & Henry Cavill dated for 2 weeks in 2013!? She was just asked about it, and had quite the reaction to the question she was asked! https://t.co/7dQoe3gACQ

The Inside Scoop On Fake PR Relationships

While the average Man Of Steel fan isn’t so savvy about these things, fashion bloggers and pop culture enthusiasts, Tom and Lorenzo certainly are. They even wrote the book on it. The married duo, wrote Everyone Wants To Be Me Or Do Me. This was their “Fabulous & Opinionated Guide to Celebrity Life & Style.”

Turns out, they devoted an entire chapter to fake relationships in Hollywood! Although the book was not out until the newly minted couple was Splitsville, they did spend some time discussing the PR couple and the “art of celebrity relationships.”

Back on July 8, 2013, they posted photos of Cavill and Cuoco doing some grocery shopping on their blog. The duo wrote, “You see, when you spend the better part of a year writing a book that deals, in part, with all the hilarious and quite transparent ways celebrities work to keep themselves viable and ensure that everyone’s looking at them, goofily staged s*** like this is Manna from heaven.”

Then, the savvy duo broke down the details. “First, we love that he’s dressed in Superman colors. Let’s not forget what this is all about. Second, we love that they’re rather conspicuously buying enough groceries to feed an orphanage. Because don’t we all do that the very instant we start dating someone? Go out and buy 400 dollars’ worth of toilet paper and chicken breasts with them? Third, the $2000 bag, which speaks for itself. And finally, the grasping and pawing at each other while inexplicably laughing and pretending not to notice the cameras trained on them. It’s glorious. We salute you two kids. You’re working that parking lot like one giant stripper pole.”

Even now, Cuoco is asked about Henry and she pretty much has nothing to say, except that she previously never had an issue walking anywhere. That brief time she dated Henry, the press was everywhere. If Henry is fake dating, this is justification for not putting a normal woman through this sort of intense stress early in a relationship. This is very understandable.

In addition, no matter what the opinion is of Natalie Viscuso, bullying can never be a positive thing. However, it does appear that this is a PR relationship.

I was always a huge #Superman fan. But it was Henry Cavill who made me fall in love with the character even more😍. It's sad that we still haven't got man of steel 2 😭😭😭 pic.twitter.com/AQYmGxGeii

Will Henry Cavill Be Superman Again?

One of the biggest questions Henry Cavill fans have is whether or not he will be wearing the red cape again. Currently, there are no plans for him to play Superman in the Snyderverse. Yet, it does not appear that Snyder has a current project. Instead, J.J. Abrams is working with journalist and writer Ta-Nehisi Coates for Black Superman.

However, Zack Snyder made it clear to the Radio Times that Henry is his Superman. “My feeling is that I love J.J., I love what he’s done in the past. I’m interested to see what happens, it’s a bold and cool and probably long overdue move. But I love Henry as Superman, of course I do. He’s my Superman.”

We do know that Henry will soon be reprising his role as Sherlock Holmes in the second Enola Holmes movie. Meanwhile, it appears that all is silent on the social media front.