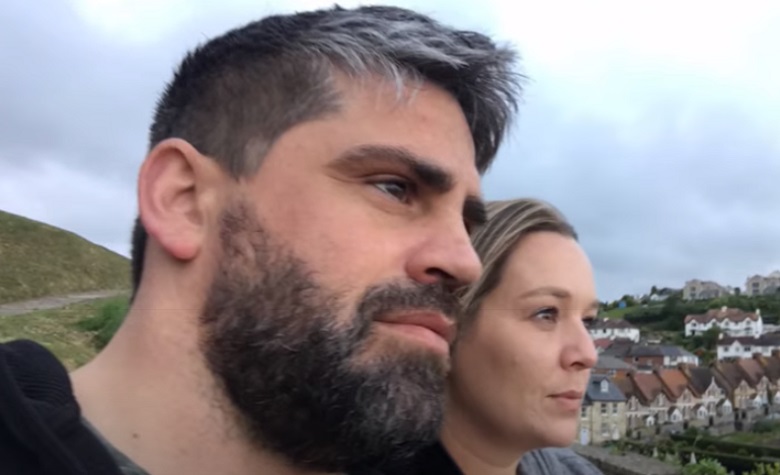 90 Day Fiance couple Rachel Bear Walters and her husband Jon Walters recently posted a new photo online that offers a glimpse into their life today. One of the first things you notice is Jon, who is without his full beard.

Jon’s facial hair seemed to grab so much fan-attention on their previous 90 Day Fiance: Before the 90 Days season. Rachel’s smile is another facial feature the fans gravitate to as well and she’s grinning from ear to ear in her new post.

This 90 Day Fiance couple made it through the show with flying colors. Despite being one of this TLC reality series most successful couples when it comes to love, Jon Walters and his wife, Rachel Bear Walters are still thousands of miles apart.

It looks like Jon and Rachel make the best of it for their recent date-night on their anniversary. Rachel got dressed up for the occasion and they drank wine/cider along with their long-distance dinner.

This was our wedding anniversary date night. Skype Dinner date with a glass of wine/cider. Dressing up for the first time in months felt strange but it was a super cute night. #ldrcouples #ldrsucks #90dayfiancequarantine @rachelwalters01 @jonjwalters

Some wives or husbands may find it liberating to click a button and poof, their spouse is gone. Then their other half stays gone until they are ready to click that button and bring them back.

This idea may seem enticing to some especially after a few years of marriage. But to this 90 Day Fiance couple, it’s torture. All these two want is to be together and from the looks of things, they have a while to go before that happens.

So, while the photo above expressed the love they have for each other, it’s bitter-sweet. Their love and marriage is the sweet part, but it’s rather bitter that they can’t be together on their special day.

This fan-favorite couple currently appears on 90 Day Fiance: What Now while still making their long-distance relationship work. Rachel and Jon became the couple who made it through the 90 days even more in love than they were before.

Still, getting Jon to America, who is now married to Rachel, became a huge roadblock and this continues today.

Jon’s previous police record gets in the way of a smooth application for a spousal visa. They need legal help which costs a lot of money. Then they were hit with yet another problem recently.

In order for Rachel to get her 90 Day Fiance husband to the states, she has to sponsor him. Rachel needs to show proof she has a paycheck as part of that sponsorship. But Rachel just lost her long-time job.

It seems the viewers of this TLC reality series aren’t the only ones pulling for Jon to finally come to America. The couple also has friends wanting to get them together as well. One friend stepped in to take over as Jon’s sponsor. Rachel’s friend Sheri, who lives in New Mexico, agreed to help.

Sheri’s offer to help was meant with yet another roadblock – Jon Walters. He was very thankful but he felt he couldn’t be beholding to Rachel’s friend for 10 years, which is the amount of time the sponsorship covers.

But living with his wife is first and foremost to Jon so this is the way they will go. It looks like Rachel and her husband were able to skirt this new roadblock on top of everything else. Although, it looks like they still have a long way to go before Jon can call America his home.

Come back to Entertainment Chronicle often for the latest news on 90 Day Fiance.