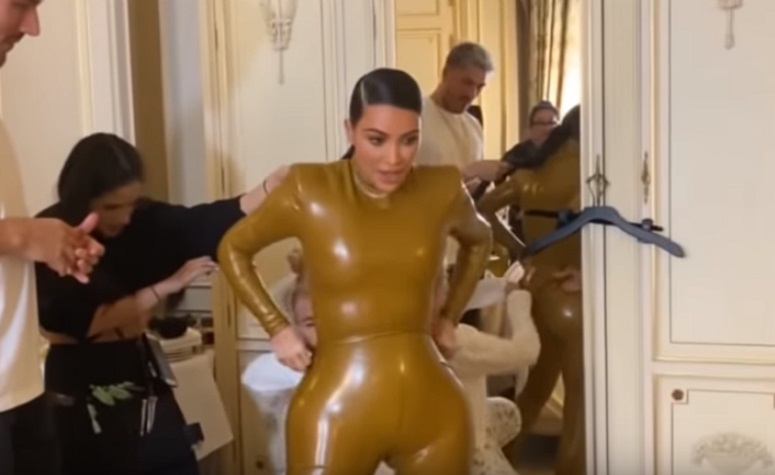 Keeping Up with the Kardashians returns for Season 18 on Thursday. In the premiere, Kim proves she will do just about anything to stay relevant. This is particularly so for her sartorial statements that seem impossible to take on — and off.

While hitting up Paris Fashion Week, the mom of four is literally poured into latex to hit the Balmain show.

“Who goes to church in latex?” Kourtney asks as she walks into the room where her sister is dressing. Kourt is already wearing a chocolate brown latex ensemble.

“We do,” Kim answers. Her attention is more on stuffing her hand down her pant leg than sincerely relating to her sister.

Kim gets help from a dressing assistant who keeps the star’s long hair out of the skintight suit. Meanwhile, another assistant tries to pull off the impossible by helping to put on the skin-sucking garment.

To Pee Or Not To Pee That is the Question

That’s when Kourt mentions she has to pee. Without missing a beat, Kim tells her to “hold it.” (Cue the laugh track.)

Kim isn’t finished dishing out bad news. She says her sibling won’t be able to go to the bathroom for hours. She then announces that she “literally pulled a muscle” putting on her latex outfit.

That shoulder trauma will have to wait. As Kim put it, “This is f***ing fashion week.”

At that point the Keeping Up with the Kardashians star inched up her pants, little by little. She works extra hard to put that piece of latex into place.

“Did I rip it?” Kim asked, a worried expression on her face.

Apparently not. Tragedy averted, she reaches out for a drink to quench her thirst.

As one of the dressing assistants called what the crew was doing to get Kim ready for Fashion Week “a sport,” Kim realized she also had to add a latex coat with attached gloves to finish her look.

“I am going to be totally boxed in,” she promises.

Pulling on one glove, she likened herself to “a housewife washing dishes.” As if.

At that point, Kim’s transformation is complete. Now all she needs to do is keep her bladder under control. Good luck.

Keeping Up With The Kardashians Keeps Up The Craziness On E!

Stay tuned to Entertainment Chronicle for more Keeping Up with the Kardashians shenanigans — and, of course, extra drama, too.

Season 18 of Keeping Up with the Kardashians premieres on E! on Thursday, March 26.